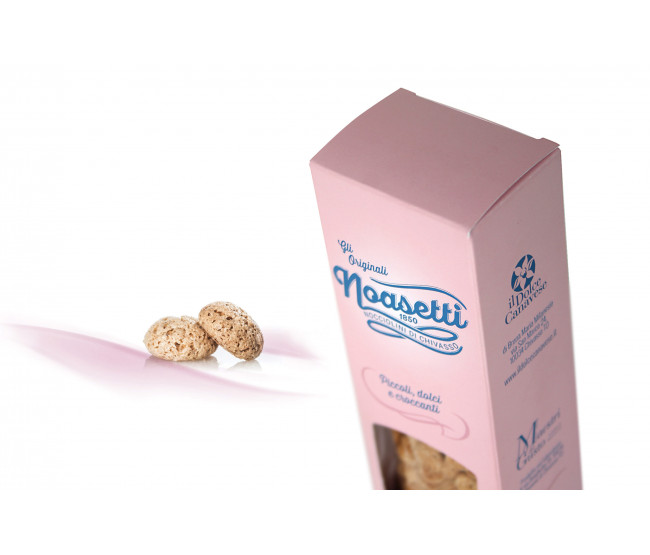 The Nocciolini of Chivasso, a Canavese town 20km from Turin, were born in 1810 at the hands of the master pastry chef Giovanni Podio. Originally called noisettes (hazelnuts in French) or noasèt in Piedmontese, they were presented in Paris at the Universal Exposition of 1900 by Ernesto Nazzaro, son-in-law of Giovanni Podio: obviously they had a huge success! So much so that in 1904 Nazzaro obtained from the Ministry of Commerce of the Kingdom of Italy the patent with the relative trademark. Vittorio Emanuele III of Savoy, fond of Nocciolini, then appointed him "supplier of the Royal House", followed closely by the Dukes of Genoa.

As often happens , simplicity is the secret of success. The Chivasso Nocciolini, in fact, are made using only 3 ingredients: sugar, egg white and hazelnuts of the precious variety "Tonda gentile delle Langhe" shelled and toasted. As they say, few but good!

How are they produced?

The ingredients are kneaded by special machines; the dough is then brought to pouring density and placed in a special pouring machine that dripping, in special sheets of special straw paper, many small droplets, which must be left to dry for about fifteen or twenty minutes and then passed in the oven for proper cooking. As in the 800, even today the Nocciolini are strictly packaged by hand in the characteristic pink paper bags.

How to enhance their taste?

Accompanying them with Zabajone, sweet and frothy cream based on eggs (yolk), sugar and fortified wine. It is no coincidence that in 1982 the Confratèrnita dël Sambajon and djj Nocciolini was born in Chivasso!
... and don't forget to pair a good passito!