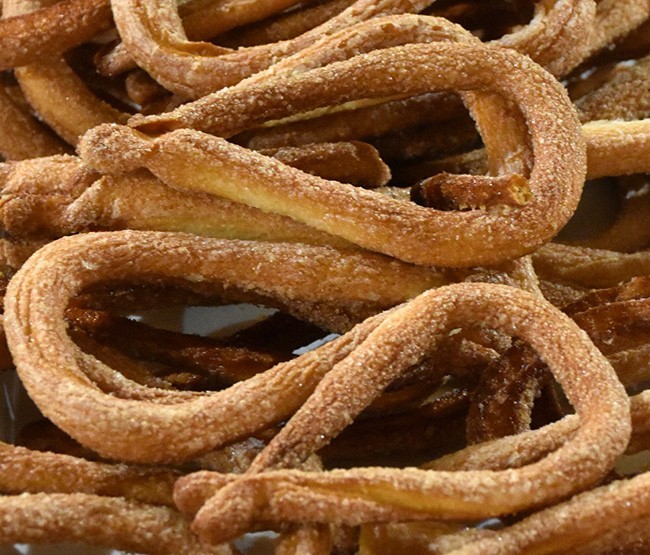 Initially called presses for their twisted shape, Agliè's torcetti were born by chance, as is often the case with all good and successful things.

In fact, it is said that Francesco Pana, pastry chef of Agliè, decided to mix with butter and eggs the advanced dough of bread and... it was immediately a success! Later he thought well to ingratiate them by passing them into sugar or honey, making them even tastier.

This new dessert spread very quickly and began to be cooked in the wood-burning ovens of the village, where families produced bread. Usually the torcetti were placed on the mouth of the oven, waiting for this to be warm enough to bake the bread.

Over time the recipe was modified and improved and, from the bread dough, we switched to a much lighter dough that was given a smaller and thinner shape, horseshoe. The surface also began to be spenized with water and caster sugar, thus becoming glossy.
The ingredients, however, always remained the same: few, simple and genuine such as flour, water, butter and sugar can be.

Sativa hemp torcetti:the appearance is green, a typical color of hemp seed flour, which is added with a percentage of 20% on soft wheat flour.

Torcetti to caluso passito: from an idea of the pastry chef Andrea Giovetti, the original dough is enriched by passito wine.

The torcetti are perfect eaten at breakfast soaked in milk or tea or can be enjoyed at the end of the meal with good coffee.
We advise you to accompany them with zabaione and a glass of Passito di Caluso.

Would you like to taste them? You can buy the torcetti onKatuma, the portal of Canavesian food and wine excellences: click here!